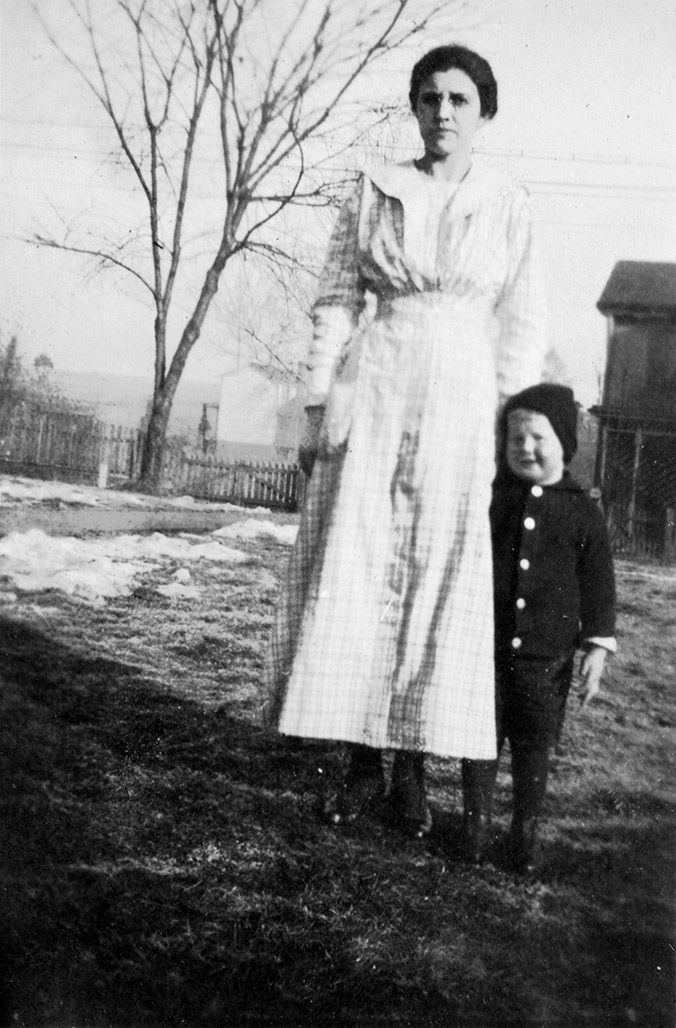 Bettie Frances (Baltimore) Harlow stands with nephew Roy. Bettie was a weaver at the mill, paid by out-put, seven cents per yard of cloth produced. Her husband, Marcellus Carter Harlow, worked in the millʼs wet-ﬁnishing department. The Harlows were Aunt Bettie and Uncle Cel to young Roy.

I had a little bird,
Its name was Enza.
I opened the window,
And in-ﬂu-enza.

In October of 1918 200,000 people died in the United States
from the Spanish Flu. Thirty-seven year old David Baltimore,
a son of the Woolen Mills village died October 25, 1918.
How to tell a story of a neighborhood? Through maps
and legends, the reading of tea leaves, received mythology.
Imperfectly. Through the memories of a child.
Roy Baltimore and his parents moved in with Cel and Bettie Harlow in the west end of Woolen Mills village (1606 WMRd) shortly before his fatherʼs death…

I had the ﬂu as I was coming here, and when I got here I had it. And I remember as clear as a bell what the treatment for ﬂu was by this particular Doctor, it was a dose of castor oil, every morning, I used to dread it, that went on for several days, I donʼt know for how long.
I was born in Richmond. My father was a conductor on the railroad, a yard conductor, in Richmond. I would think that the date would have been around 1916 when he developed an illness, I was born in 1914. He developed an illness, had a leaking valve in his heart and it killed him. He died when I was four and I came to live with my Uncle Cel in that brick house across the street here (1606 Woolen Mills Road).
See my father was brought here, from Richmond before he died. I think he lived here maybe eight to nine months, I donʼt know how exactly how long, before he died.
I vaguely remember him because I was just a little over four years old when he died. But I remember once he was sitting on the porch, I have a picture of him sitting on that porch over there, and there was a snake in the yard, and I was getting close to the snake and he cautioned me about it.
I can remember that.
Itʼs a strange thing how your memory can go back and pick up little isolated items, because prior to moving here from Richmond, I can remember well the layout of the apartment we had over on Church Hill. The kitchen was back here, there was a combination dining room bedroom ahead of that and another small room ahead of that. And I can remember my mother telling me “Get your toys up because your daddy is going to be here pretty soon.” Words to that effect, and I couldnʼt have been more than four years old at that time. Thatʼs remarkable that memory is in your mind.–RB