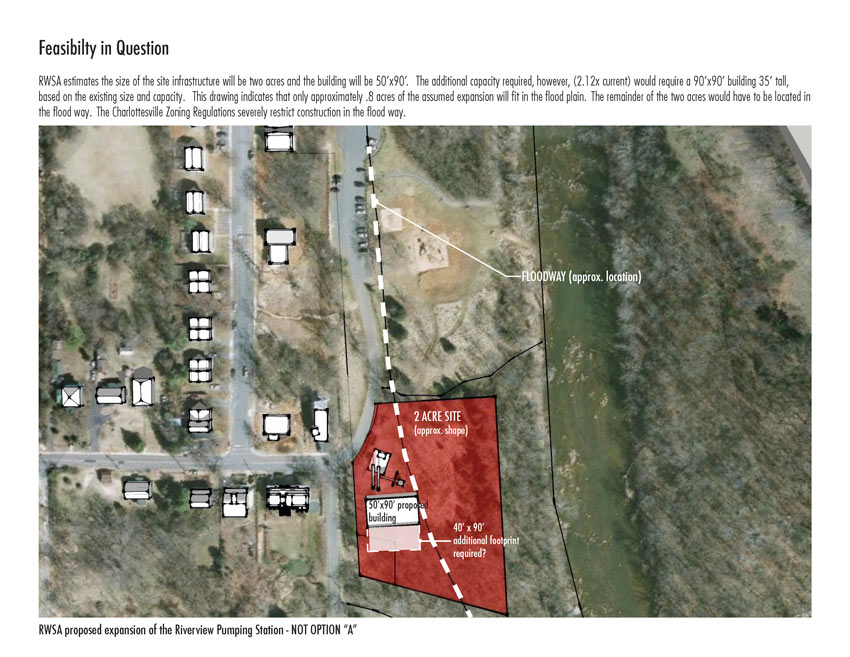 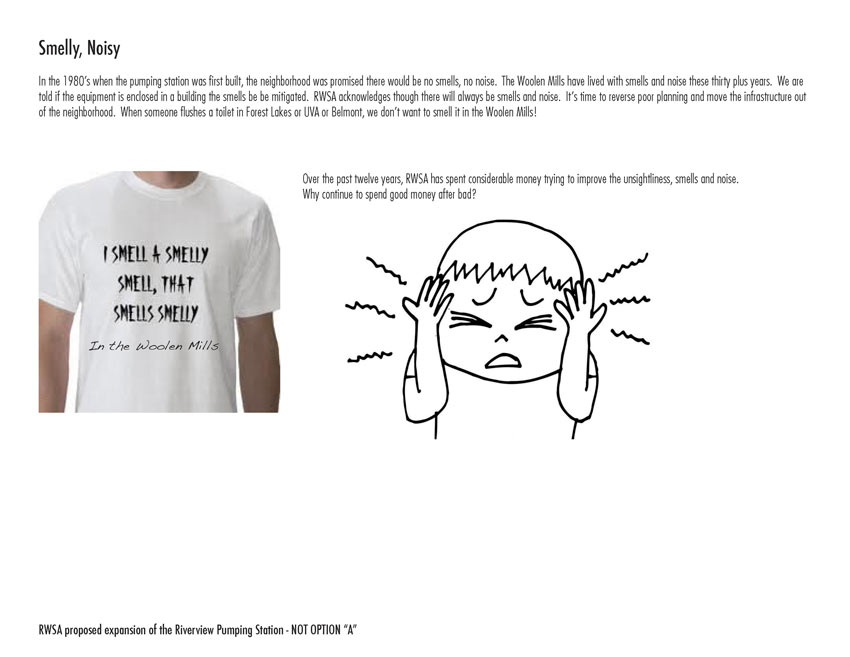 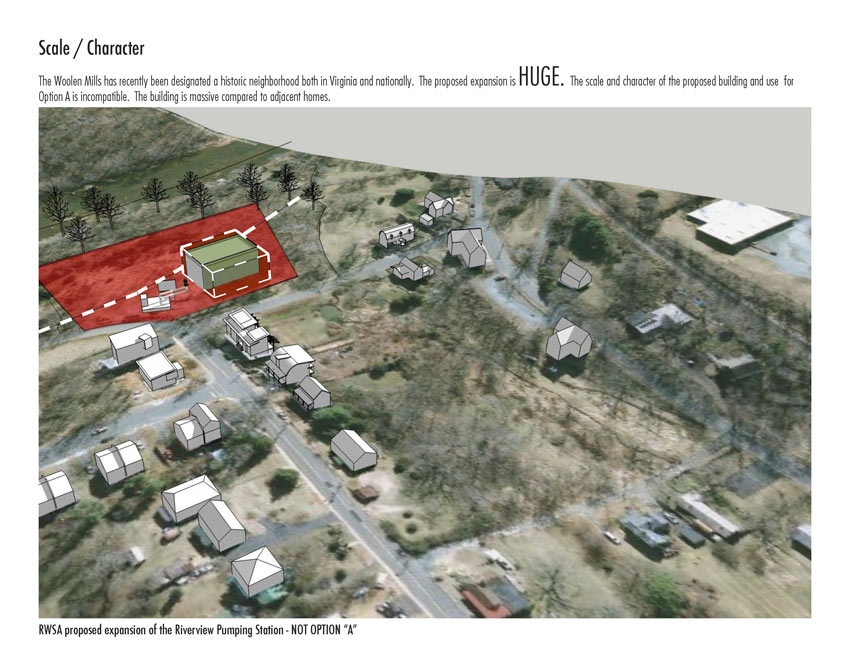 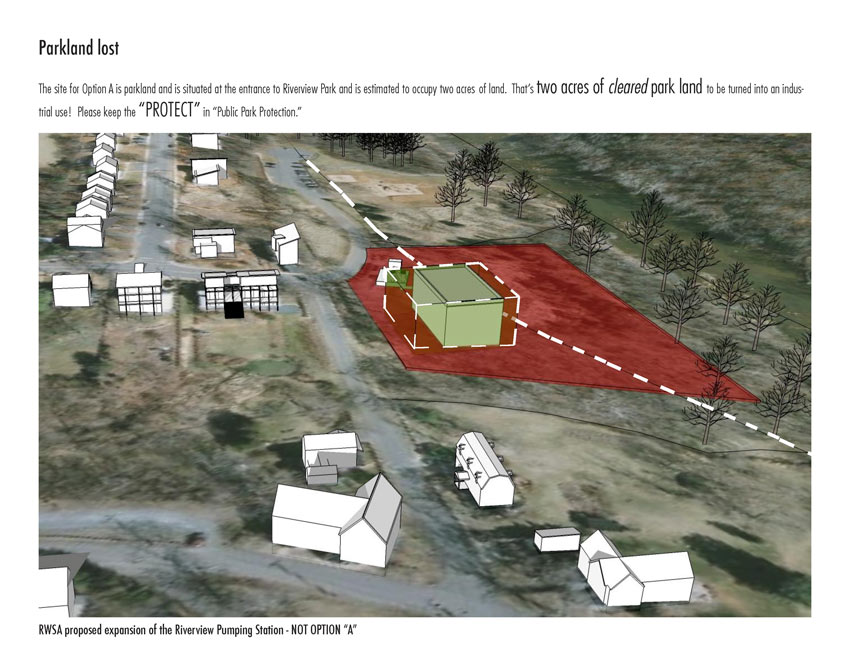 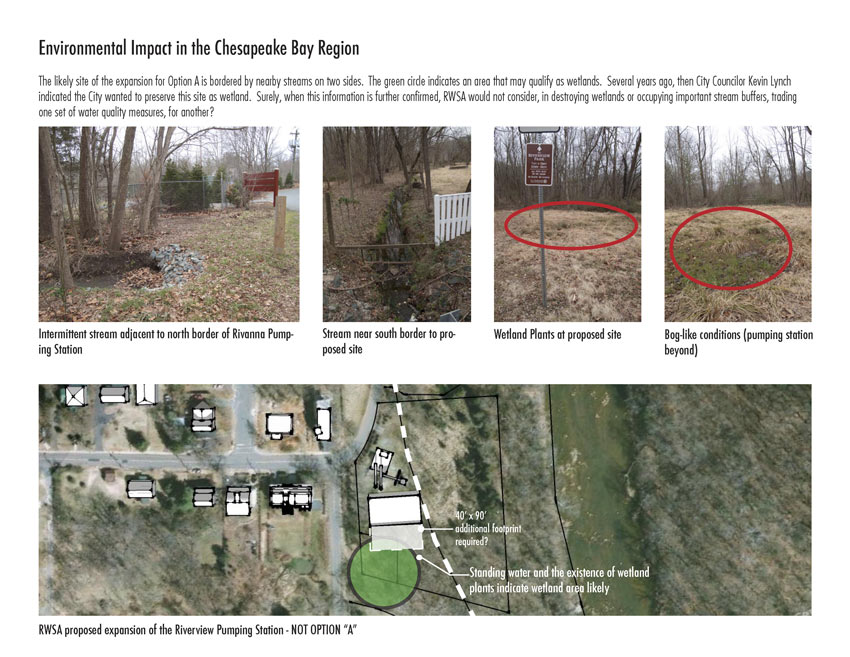 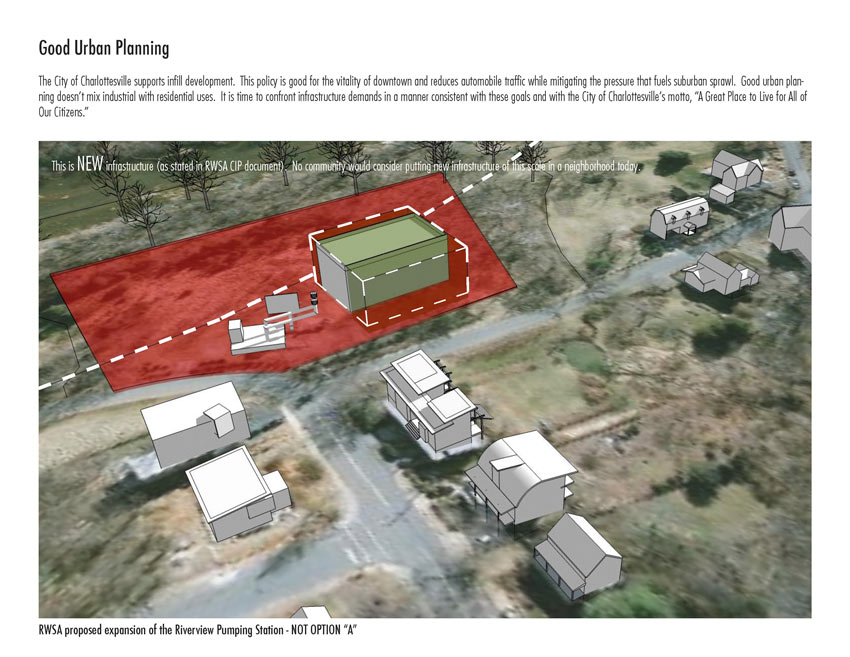 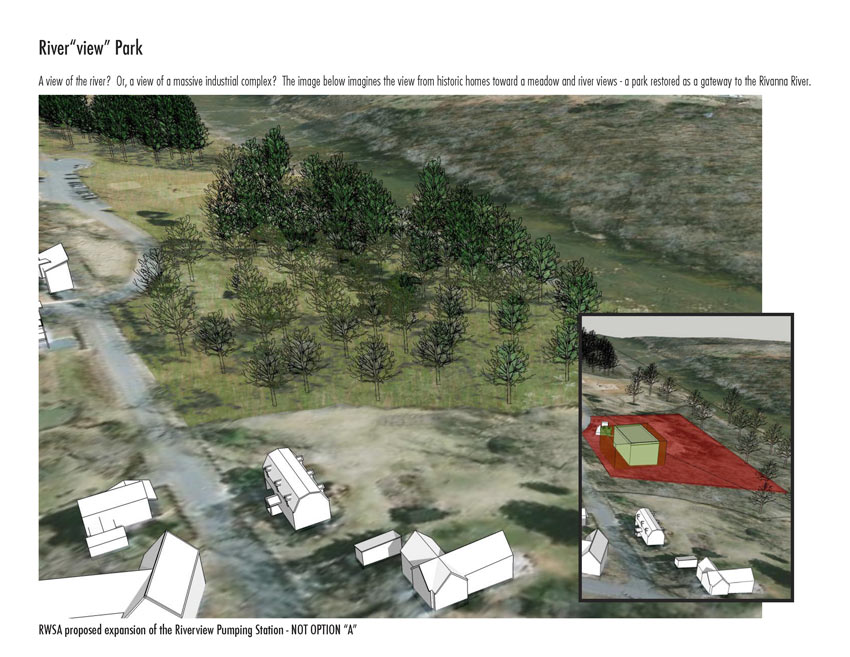 Click here to download a high resolution version of this document. The document above was prepared and presented to Charlottesville City Council by Woolen Mills resident Allison Ewing during the “matters from the public” portion of the March 7, 2011 Council meeting. The text below is a repeat of the text above, included so it can be found by Internet search engines.
To facilitate search engine function I add the following keywords: sewage pumping plant, floodplain, Park, DEQ, residential neighborhood, EPA, Executive Order 12898 of February 11, 1994, Environmental Justice.–Bill Emory

Feasibilty in Question
RWSA estimates the size of the site infrastructure will be two acres and the building will be 50’x90’. The additional capacity required, however, (2.12x current) would require a 90’x90’ building 35’ tall, based on the existing size and capacity. This drawing indicates that only approximately .8 acres of the assumed expansion will fit in the flood plain. The remainder of the two acres would have to be located in the flood way. The Charlottesville Zoning Regulations severely restrict construction in the flood way.

In the 1980’s when the pumping station was first built, the neighborhood was promised there would be no smells, no noise. The Woolen Mills have lived with smells and noise these thirty plus years. We are told if the equipment is enclosed in a building the smells be be mitigated. RWSA acknowledges though there will always be smells and noise. It’s time to reverse poor planning and move the infrastructure out of the neighborhood. When someone flushes a toilet in Forest Lakes or UVA or Belmont, we don’t want to smell it in the Woolen Mills!
Over the past twelve years, RWSA has spent considerable money trying to improve the unsightliness, smells and noise.
Why continue to spend good money after bad?

Scale/Character
The Woolen Mills has recently been designated a historic neighborhood both in Virginia and nationally. The proposed expansion is HUGE. The scale and character of the proposed building and use for Option A is incompatible. The building is massive compared to adjacent homes.

Parkland Lost
The site for Option A is parkland and is situated at the entrance to Riverview Park and is estimated to occupy two acres of land. That’s two acres of cleared park land to be turned into an industrial use! Please keep the “PROTECT” in “Public Park Protection.”

Environmental Impact in the Chesapeake Bay Region
The likely site of the expansion for Option A is bordered by nearby streams on two sides. The green circle indicates an area that may qualify as wetlands. Several years ago, then City Councilor Kevin Lynch
indicated the City wanted to preserve this site as wetland. Surely, when this information is further confirmed, RWSA would not consider, in destroying wetlands or occupying important stream buffers, trading one set of water quality measures, for another?

Property Values and Fairness
The difference between the costs of Option A (the least expensive – $25,000,000) and Option C (the most expensive – $37,000,000) is only 6 cents/1000 gallons. The average household uses roughly 5,000 gallons/month so the difference is only 30 cents/month for the average household – the equivalent to the price of a cappucino, on a yearly basis. Realtor Roger Voisinet estimates the property value of the adjacent home to be negatively impacted by $50,000.
The pumping station serves neighborhoods in the City and County and as distant as Forest Lakes, yet it has to solely bear the burden of the expansion? It seems only fair the pumping station expansion be
relocated and the costs of approximately 30 cents/month shared by all users.

Good Urban Planning
The City of Charlottesville supports infill development. This policy is good for the vitality of downtown and reduces automobile traffic while mitigating the pressure that fuels suburban sprawl. Good urban planning doesn’t mix industrial with residential uses. It is time to confront infrastructure demands in a manner consistent with these goals and with the City of Charlottesville’s motto, “A Great Place to Live for All of Our Citizens.”
This is NEW infrastructure (as stated in RWSA CIP document). No community would consider putting new infrastructure of this scale in a neighborhood today.

River “view” Park
A view of the river? Or, a view of a massive industrial complex? The image below imagines the view from historic homes toward a meadow and river views – a park restored as a gateway to the Rivanna River.–Allison Ewing