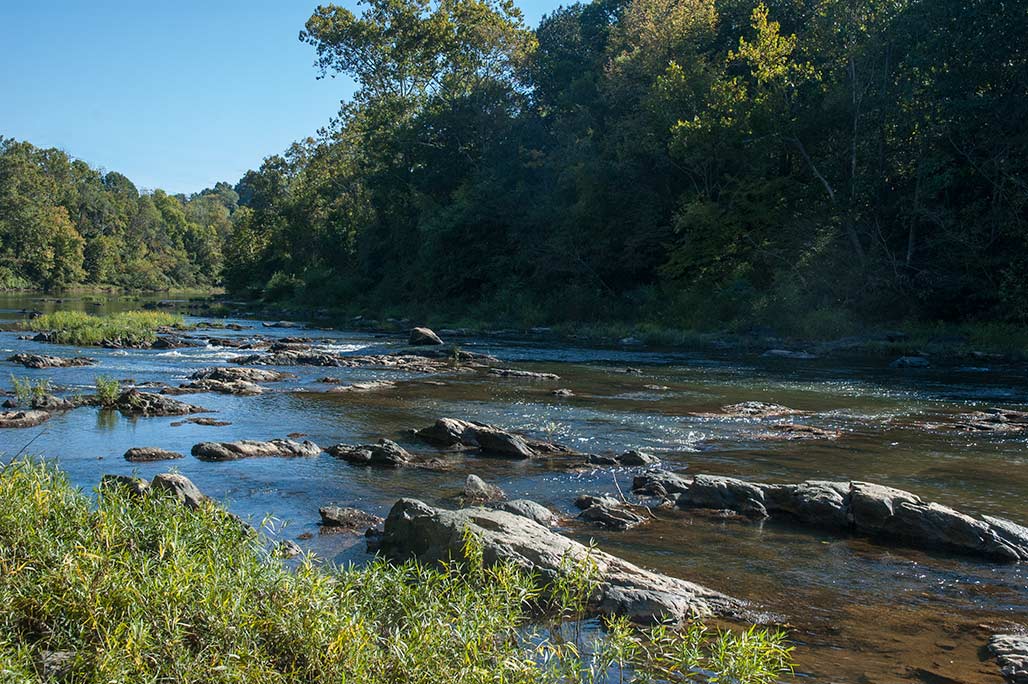 Historically, the Rivanna River played an essential role in the settlement, use, and development of the Charlottesville region. For Monacans and other native people, the river provided food, an important means of transportation, and a secular and spiritual landscape in which the riverbanks accommodated villages for the living and burial mounds for the dead. As Europeans and Africans and their descendants moved into the region in the early eighteenth century, the Rivanna River’s primacy continued. Settlers relocating from eastern Virginia traveled along the river system, up the James River to the Rivanna River; there they followed the Rivanna northwest through the passage in the Southwest Mountains into the Charlottesville region. In the 1730s, Peter Jefferson, William Randolph, Nicholas Meriwether, and others settled huge royal land patents, tracts that often took the Rivanna River as their border. The river and the lands along it were the most familiar, civilized, settled, and cultivated part of the region. The river’s name itself involved a gesture of culture and appropriation, honoring Queen Anne who reigned over England, Scotland, and Ireland from 1702-1714.

The significance of the Rivanna for early European settlers and their descendants was readily apparent in the way they established their claims to land. As they staked their land claims along the Rivanna in the eighteenth century, they used the river as a clear border. The settlers also counted on the river overflowing its banks during flooding and replenishing the agricultural lands with rich silt deposits. The river would also carry agricultural products, like tobacco and wheat, to market in Richmond, where they would continue to other markets on established waterborne commercial routes. Before Thomas Jefferson became president, he drew up a list of his chief public accomplishments. It is notable that the first item on his list was his success in the 1760s in getting an act of the Virginia Assembly that worked in concert with a privately raised subscription to clear obstructions from the Rivanna so that the river could “be used completely and fully for carrying down all our produce.”