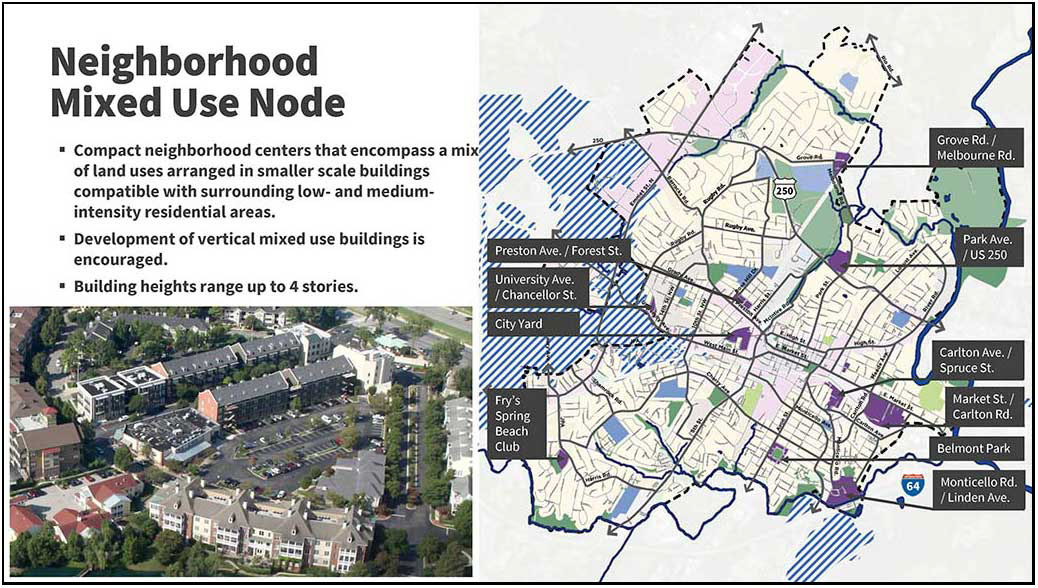 page 17 of a slideshow shown at the 3/30/2021 Planning Commission work session. https://boxcast.tv/channel/iweiogrihxlnnvn2sxqx

From the fog of COVID, a draft land use map has emerged. The planning document looks to be a blue print for urban renewal and the starting gun for the teardown of affordable housing in the Woolen Mills Neighborhood. 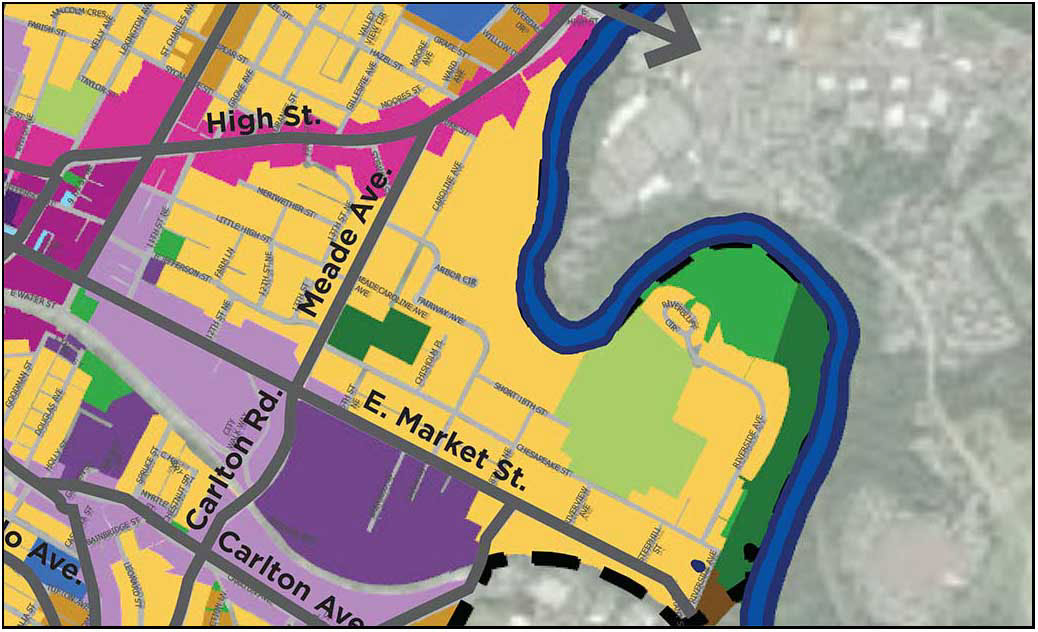 The above map is a detail from the draft Land Use Map which was discussed at the Charlottesville Planning Commission’s 3/30/2021 work session. Of particular interest, the purple “Neighborhood Mixed use node” placed on the Woolen Mills neighborhood. At 40 acres, this is the largest such node proposed in the City. 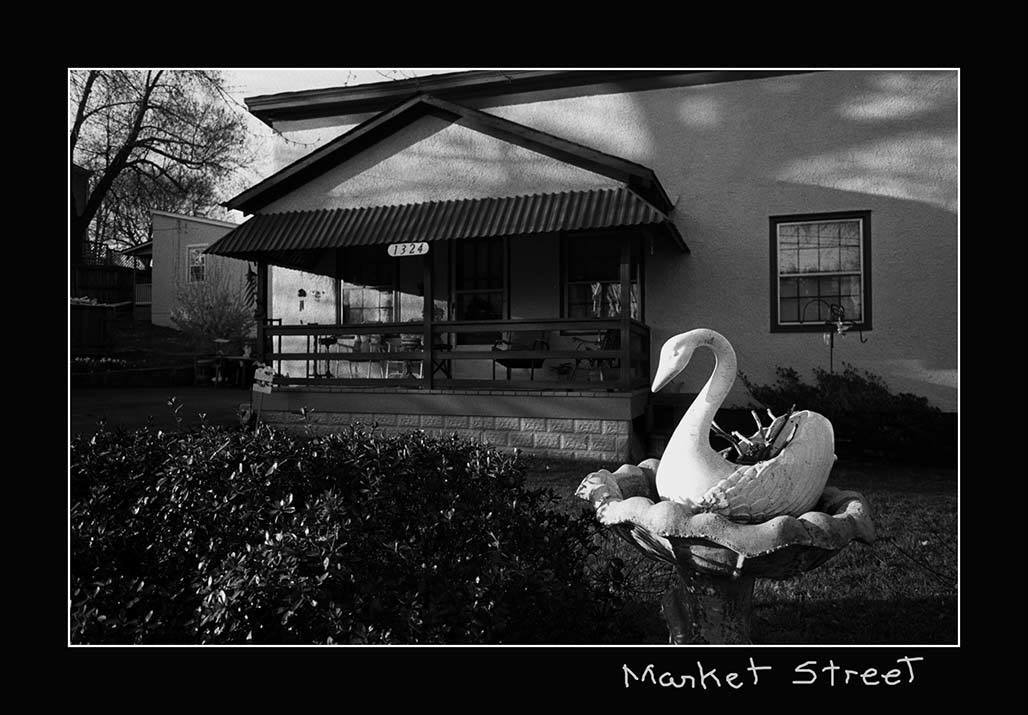 People have lived in houses lining the south edge of Market Street between Meade Avenue and Franklin Street for 135 years. You do not know their names. They are not rich or famous. They call this area their home. 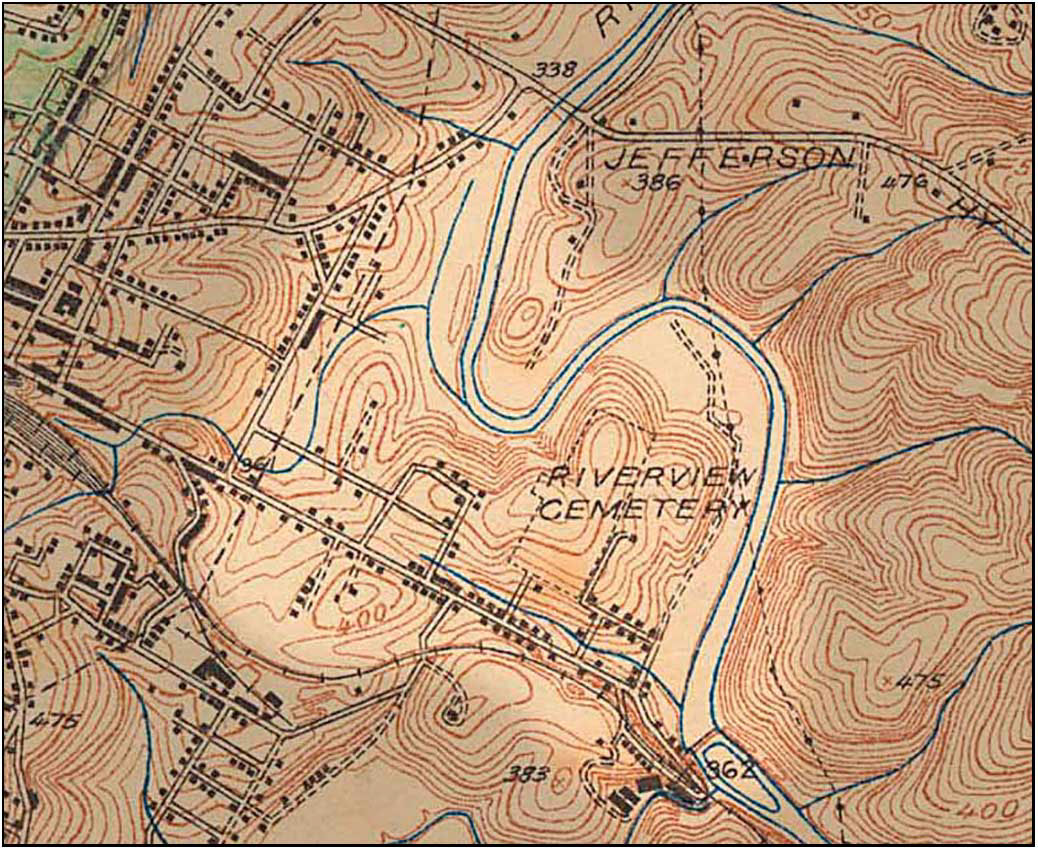 detail from 1935 topo map. In 1935, 19 houses lined the southern edge of Market Street between Meade and Franklin

Since its first comprehensive Plan in 1958 the City has represented the bifurcated planning laid across the backyards of these Market Street residential properties in a series of zoning and land use maps.
For 60 years these maps have recognized two elements. The maps show proposed manufacturing, industry, and business in the southern 70% of the land and residential uses bordering Market Street and Franklin. 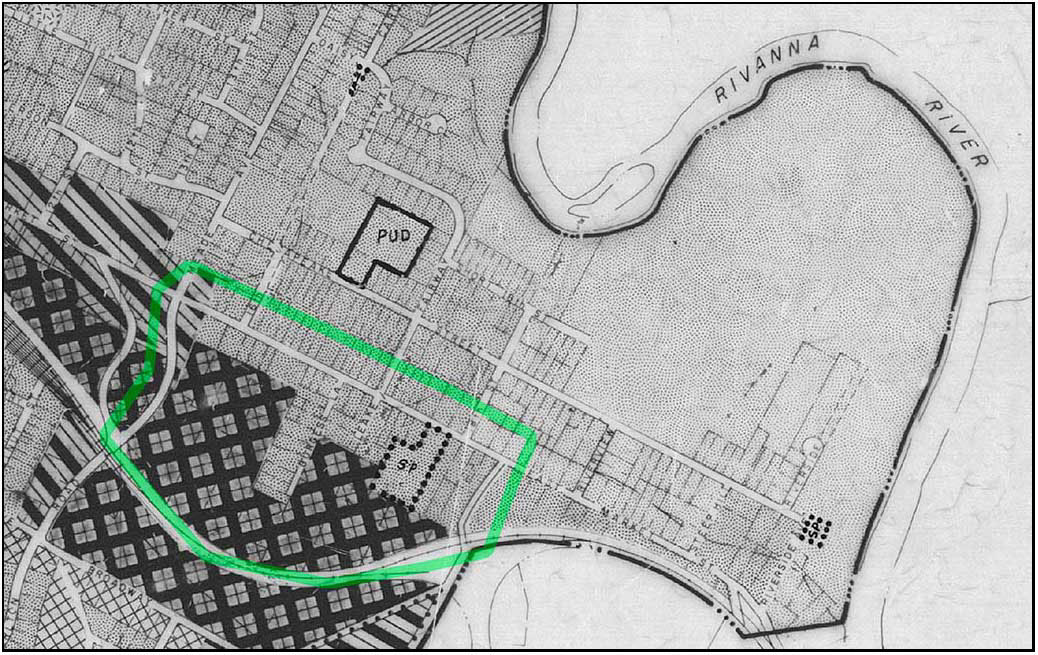 This bifurcated zoning/land use was placed in the backyards of houses and residential properties fronting on the southern edge of Market Street. This allows manufacturing-industrial-business adjacency to residential use, cheek to jowl. 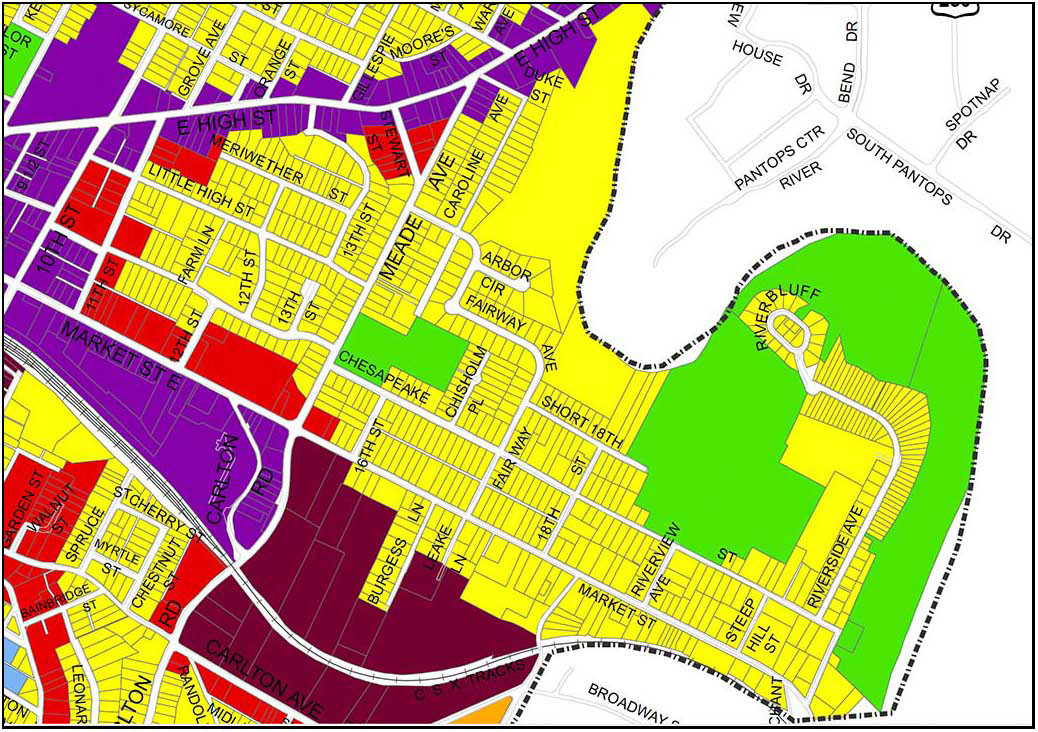 The Woolen Mills Neighborhood has appealed for thoughtful, community-based study and correction of this poorly thought out land use/zoning layout for decades. The Woolen Mills first formal request for a small area plan was made of the City Council at their August 1, 1988 meeting.

In 2013 the Woolen Mills Small Area Plan request had risen to the top of the SAP list, but was bypassed for more exigent planning challenges (Route 29 North, Starr Hill and Cherry Avenue). 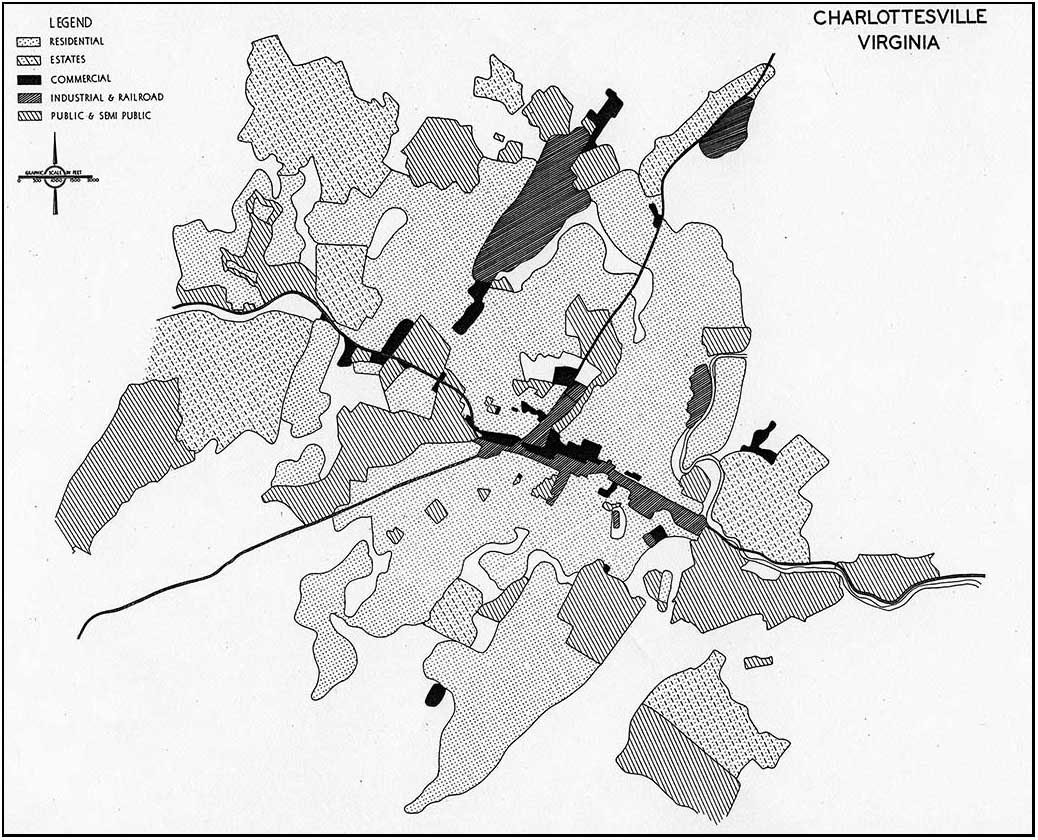 The “new” draft Land Use Map mimics the “Future Diagrammatic Land Use Map” produced by Harland Bartholomew and Associates for the City of Charlottesville in October 1956 in regards to its blanket treatment of the residential community south of Market between Meade Avenue and Franklin Street.
(HBA were the primary architects of “urban removal” in the United States back when neighborhoods were torn down with bulldozers.)

Hoping against hope that the powers that be will rethink the proposed upzoning and destruction of the residential neighborhood fronting on the southern edge of Market Street.
We live here. Please…

The area of concern outlined in green.

City Planning Commission member Sue Lewis advised residents from the Woolen Mills neighborhood that “you should have mobilized sooner. When you are living in the middle of a potentially unwanted development, you should act before something happens.”—7/14/1988 Planners approve warehouses in Woolen Mills district by Kay Peaslee Observer staff writer

I think this issue about, you probably can go all throughout the City and find properties that are, inconsistencies between the land use and comprehensive plan and I think it behooves citizens to be
alert to every single one of those fragments that are left in the City. And I think we are working overtime to try and identify them all and I think it is grossly unfair that everyone should anticipate these areas that are caught in between.

I believe though that the Woolen Mills Neighborhood has not had the benefit of a real plan for how these acres and acres of M1 and B3 uses are going to be developed over ten or twenty years and other neighborhoods have had the benefit of that and it’s made a significant difference in how land will develop.

I think it is long overdue for the Woolen Mills that they have a clear signal of where their neighbor-hood is going, and not be done in this piecemeal fashion.
So I guess my hope would be that out of this process, given the talent that they have in their neigh-borhood, that they get together and decide that proactively we are going to tell you what the future of our neighborhood is going to be, and it is not going to continue to be an erosion of the things that they have come to feel anchor their neighborhood, that’s the residential use and some of the mixed use strategies that they have.
So that is one thing I would hope would come out of this process, and I guess you’ll have to wait to hear the outcome, for another two weeks.— Maurice Cox, April 7, 2003